Dublin’s Ballsbridge Hotel was transformed into a sea of green and red for this year’s Yew Tree Ball on Saturday 9 February, with over 460 guests turning out in glamorous style to honour our 2019 award winners – Cathal Hughes, Sara McFadden and the Mayo’s Forgotten Famine Girls’ Remembrance Group.

Our three award winners were individually welcomed to the room by Paul Sammin, former chair of the Association, each accompanied by officers of the Association. Paul opened the proceedings welcoming all dignitaries and guests present, including the Australian Ambassador to Ireland, Richard Andrews and his wife Saovanee, Vice Admiral Mark Mellet, TDs Dara Calleary and Lisa Chambers, Senators Rose Conway Walsh and Michelle Mulherin, Mayo County Council’s Chief Executive Peter Hynes and Cathaoirleach Cllr Blackie Gavin, as well as many councillors. 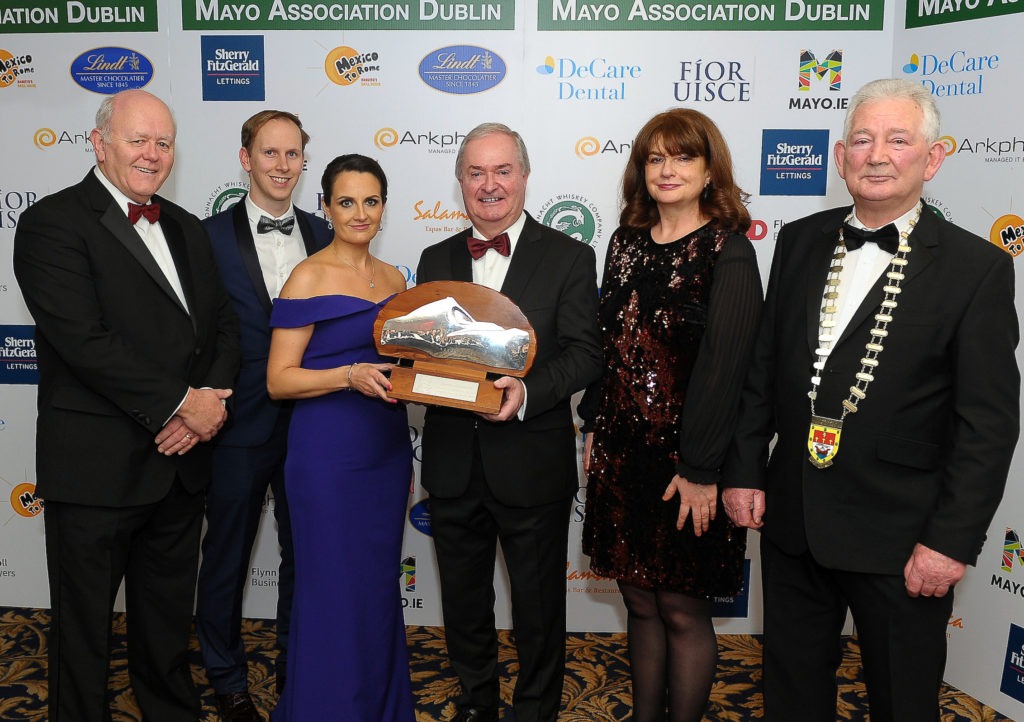 Paul thanked the many sponsors of the event and commenced the revelry with the draw of six generous door prizes including an overnight stay at Ashford Castle, and a health check for the Mater Private worth €600. Angelina Nugent from MWR, who was MC for the occasion, helpfully kept guests up to date with the ongoing match scores between Mayo and Cavan, not to mention Dublin versus Kerry!

Guests were treated to a pre-dinner sparkling prosecco reception as well as a stylish Concullin Gin Bar, generously sponsored by the Connaught Whiskey Company Limited, before being seated for a sumptuous four-course meal. The glittering black tie event included a raffle of over 60 prizes worth well in excess of €10,000 generously donated by businesses in Mayo and Dublin. 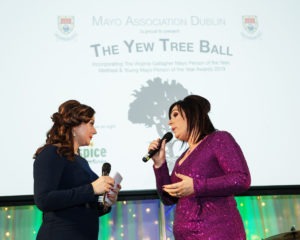 The Association chose Mayo Roscommon Hospice Palliative Care Service as its charity partner for the event. Martina Jennings, CEO of Mayo Roscommon Hospice, presented a specially-commissioned moving video that outlined the important work carried out by the hospice and their fundraising goals in building two state-of-the-art palliative care units in both Castlebar and Roscommon Town. Martina is pictured (left) speaking to Angelina about their ongoing work.

The proceeds of the huge bumper envelope draw on the night were donated to help with their ongoing fundraising work.

Julie Doyle, Chairperson of the Association, said: “We are very grateful to all our guests, our generous sponsors and prize donors for their overwhelming support of the premier event of the Association. Our awards provide a very important recognition for the hardworking people in our county and we are delighted to be able to celebrate their achievements and contributions in a special way. This year’s awards were a great success and we were honoured and humbled to hear our winners’ stories.”

The celebratory scene was set for the night when guests learned of Mayo’s win over Cavan and Dublin’s loss to Kerry by Angelina, who added a sense of fun and vibrancy as well as professionalism to the night. Angelina was an honorary committee member for the night as her love of all things Mayo shone from the stage! 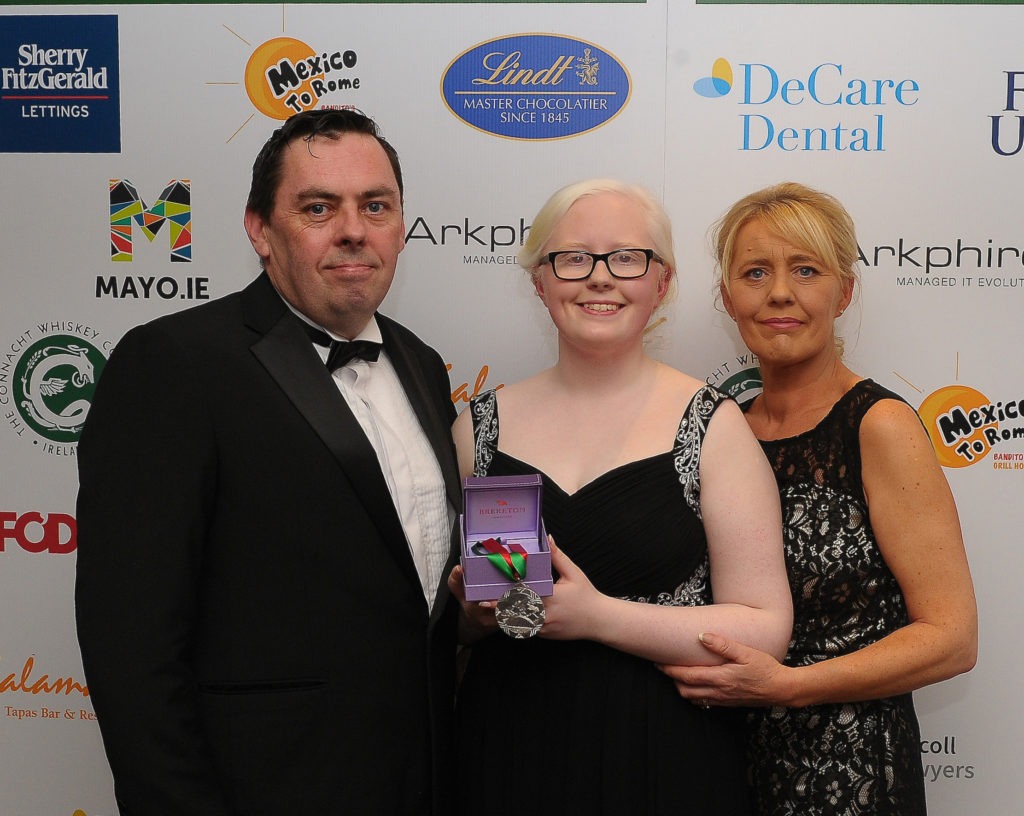 The inspirational Sara McFadden from Turlough added another award to her growing collection. The 17-year-old was awarded the ‘Young Mayo Person of the Year Award’ by committee member Dr Mona McGarry (pictured below) who presented Sara with a bursary cheque for €1,000, following her on-stage interview with Angelina. 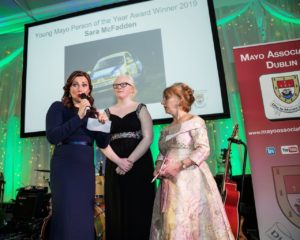 Sara received the award for the example she sets for young people, particularly those who face personal adversity, and she herself has become Ireland’s first visually impaired rally car navigator! It is clear she is fast becoming an advocate for people with disabilities proving that no challenge is too big for her having also just completed her Leaving Certificate mock examinations the day before the awards gala!

Renowned historian and author Terry Reilly accepted the Meitheal Award on behalf of the Mayo’s Forgotten Famine Girls’ Remembrance Group, presented by President of the Association Eddie Melvin, who is also a proud Ballina man! The work of the Group in commemorating the life of Mayo’s 137 forgotten famine girls gave recognition and dignity to a group of women who were forced to leave Mayo in very difficult circumstances in 1848-50 during the Great Famine. 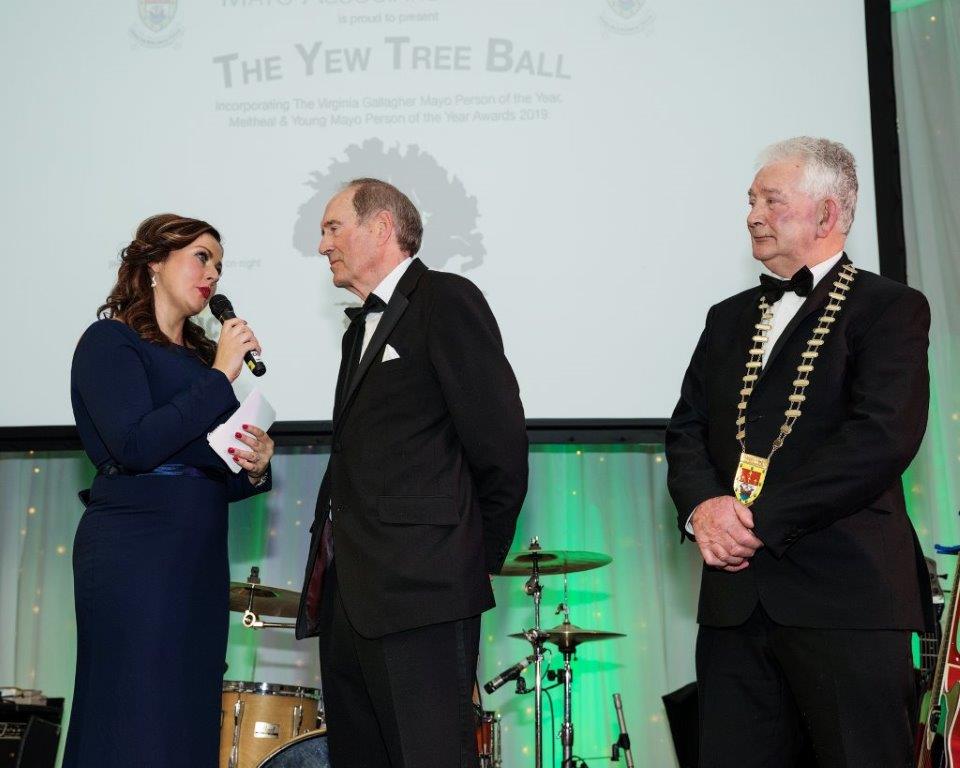 Terry Reilly (pictured above with Angelina Nugent and Eddie Melvin) spoke about the importance of Mayo people maintaining their connections and he thanked, in particular, the Association’s committee member Noel Howley for the role he played in transporting the ‘Orphan Girl’ statue to Ballina on a day’s notice! The group’s specially-created commemorative quilt was displayed beside the stage on the night.

The scale of the work undertaken in their project was remarkable and created a fitting connection between the women, their home county and their descendants with particular regard to their contribution to Australia. The Association was also honoured by the attendance of Australian Ambassador to Ireland Richard Andrews and his wife who celebrated the presentation of the Meitheal award. 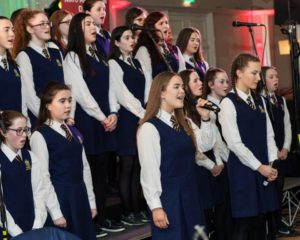 Following an emotional interview with Terry, guests were also treated to a haunting emotional rendition of Brendan Graham’s song ‘Orphan Girl’ performed by the choir of St Mary’s Secondary School Ballina, followed by his popular hit ‘You Raise me Up’, conducted by their teacher, Regina Deacy, who was presented with a bouquet of flowers by James Owens (8) the son of the chairperson Julie Doyle.

The girls, who had travelled especially to Dublin for the event, received a standing ovation from the full house to rapturous applause. It was the highlight of the night for many guests.

A presentation was made to Sr Maureen Lally of a replica award as last years’ winner by Julie Doyle, chairperson, who then spoke to Angelina about the great success of the night and told guests about our inaugural Mentorship event on Friday 1 March. She also spoke about the Association’s pride in being able to recognise the county’s home-grown heroes for the often quiet but very important work they do.

The big award of the night was the presentation of the prestigious ‘Virginia Gallagher Mayo Person of the Year’ award to Cathal Hughes. During his interview with Angelina, it was obvious to all that Cathal is a very deserving winner with his passion for Mayo and a clear vision for Westport, not to mention the integral role he has played in its development as a town and tourism destination. 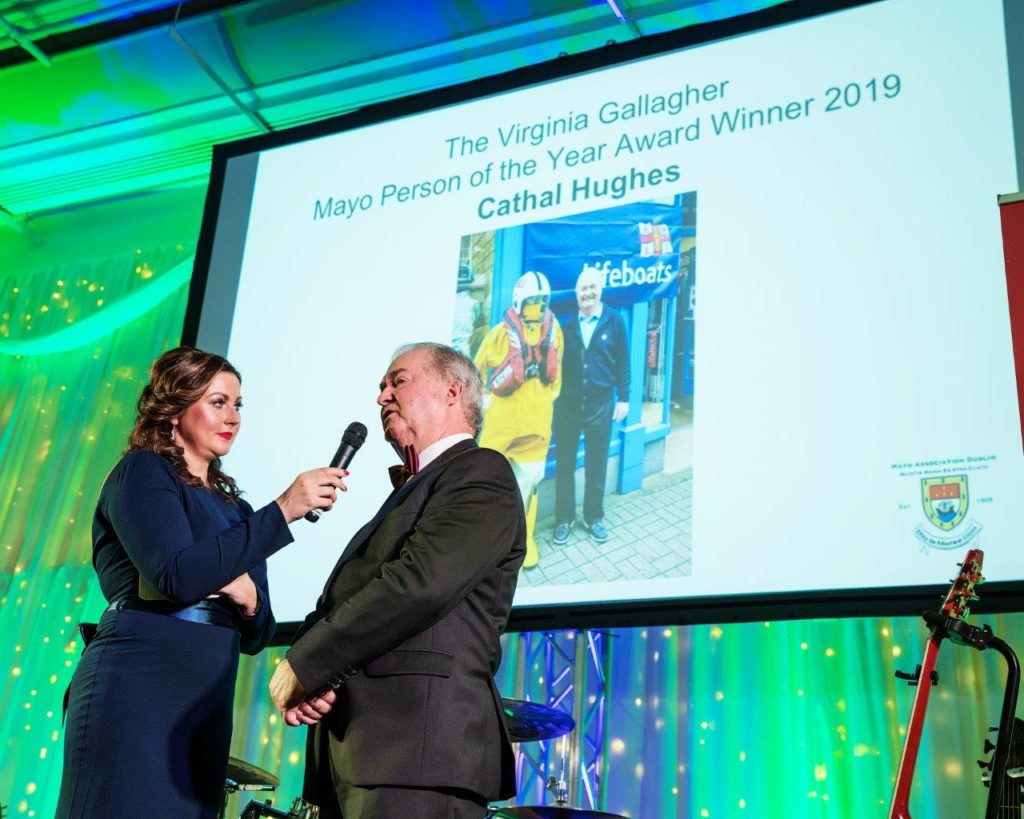 He described the challenges of business in the early 1970s from postal strikes to bank strikes, and he also described their decision to purchase Westport House. He then spoke about the challenging personal campaign he fought to change the laws on carbon monoxide detection.

After a six-year battle with many doors being closed to him, the laws on the mandatory requirement for carbon monoxide alarms in homes were finally changed, with the first National Carbon Monoxide Awareness Week rolled out in 2008. The campaign’s awareness week takes place every September. 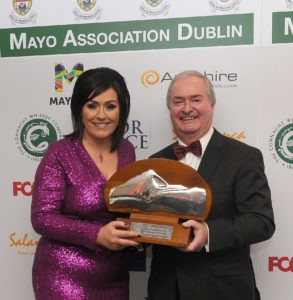 He also spoke about the pride he felt in the presence of Mayo Roscommon Hospice (pictured left with CEO Martina Jennings) – the charity partner of this year’s Yew Tree Ball. He described his involvement in the charity as a founding member along with the Westport Lions Club.

Cathal Hughes then received the award to a standing ovation in the room and joins the Roll of Honour as the first Westport winner of the award since its inception in 1964.

Following the awards presentation the guests danced the night away to the energetic tunes from Simon Casey and his band, and the dance floor certainly remained full for the night!

The Yew Tree Ball was also recorded by Henry McGlade of Atlantic Productions, and the programme will be broadcast on Sky Channel 192 (Freesat 161) on Thursday 11 April @ 7pm, for the Irish diaspora on ‘Ireland Home and Abroad’. It will be repeated on Saturday 13 April @ 8pm and Tuesday 16 April at 12.30 lunchtime.

In the meantime, here’s a promotional video of our Yew Tree Ball from Ballsbridge Hotel by IMayo TV.

Mayo Association Dublin would also like to thank the members of the media from Mayo, who do so much to promote our activities and by telling the stories of the award winners, thereby ensuring their good example is shared throughout our county.

Here’s a selection of snapshots of our special dignitaries and guests who joined us to celebrate in style at this year’s Yew Tree Ball.

SPONSORS: Sincere thanks to our sponsors for supporting ‘The Yew Tree Ball 2019’. We could not run an event of this calibre without their invaluable financial assistance, and it’s much appreciated,